How long have you called Maple Ridge home?
I was born here and grew up here – so, my whole life!

What inspires you to give?
Knowing how many people have helped me along the way, and appreciating that I have the ability to give back in many different ways.

What makes you proud to be from Maple Ridge?
Being so close to the mountains and nature, as well as the safe, community feeling you get living here.

How do you keep yourself happy and healthy?
I like to always be busy and productive. I am conscious of standing as much as I can, working out, and eating healthy. If I do these things, I am 100% at my happiest and healthiest.

What’s the kindest thing someone has done for you lately?
A lot of people have provided me with opportunities in coaching lately, that I am thankful for!

Who is your hero, and why?
I definitely have to go with my mom. That woman is unbelievable! She does everything for everyone else, has shown me that it is good to be busy, and always steps out of the house with a smile and a giddy attitude that is contagious!

Growing up in Maple Ridge, BC, Larissa Franklin was a member of the White Rock Renegades organization until she made the jump to Softball Canada’s Women’s National Team program. Known for her excellent slap game and incredible speed, she earned a spot on the Junior Women’s National Team in 2011.

Franklin recently transferred to Western Kentucky University for her senior year after spending three years at Indiana University – Purdue University Fort Wayne, where she led her team in batting average (.459), hits (84), total bases (106), stolen bases (19) and on-base percentage (.515) and was named to the Summit League First All-Conference Team last season. Her .459 average was second in the Summit League this season, and was also the fourth-best single season batting average in Summit League History, while her 84 hits were most in school history and second most in League history. With one season of eligibility remaining, she is already IPFW’s career record holder in stolen bases and is also in the top five in runs scored and hits.

At the National Team level, Franklin’s first international experience came as a member of the Junior Women’s National Team in 2011, where Canada finished fifth at the ISF Junior Women’s World Championship in Cape Town, South Africa. She joined the Women’s National Team in 2013, competing in the US World Cup of Softball VIII, the Canadian Open Fastpitch International Championship and the VIII Pan American Championship in Puerto Rico where Team Canada won the silver medal. In 2014, she started nine games for Team Canada at the ISF Women’s World Championship in Haarlem, Netherlands, finishing second on the team with a .409 batting average. With stellar plays in the outfield, Franklin most recently helped Team Canada take home Gold at the 2015 Pan American Games in Toronto. 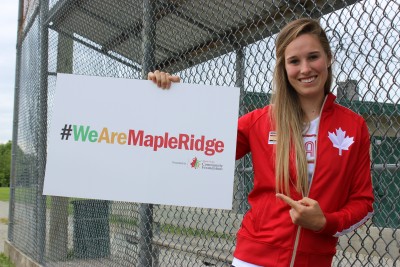